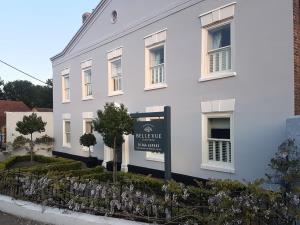 Home to the Wardle family, the guest house has a total of five spacious en-suite bedrooms – all tastefully transformed, separate from the owners’ living quarters and each having its own unique theme.

If you prefer the modern or the traditional, there is something at Belle Vue to suit everyone. Breakfast is served in a delightful room that looks out on to the war memorial and village church. The room has an inglenook fireplace, perfect for taking the chill off those frosty mornings. For the Summer mornings, the room opens to the quaint terrace, the ideal setting for reading the paper whilst enjoying a leisurely breakfast.

The welcoming village of Denver has two pubs; two golf courses; fishing lakes; a sailing club; a village general store and post office; and, until very recently, one of the last working windmills in Norfolk but is still an attraction. The area is the very popular for walking and cycling routes as Denver is a stop off on Fen Rivers Way.

Prices from £115 per room per night for bed & breakfast

By car: Accessible from the north or south on the A10 from Kings Lynn/Ely; from the west via the A47 & A1122 Peterborough/Wisbech; or, from the east via the A47 Norwich/Swaffham.

By public transport: Downham Market railway station is on the Fen line is situated between Littleport and Watlington stations.
Most trains calling are operated by First Capital Connect (with service to and from London King's Cross), with some additional peak services being operated by Greater Anglia (to and from London Liverpool Street). We are a 5 min taxi ride from Downham Market station.